(Photo found at this site: http://www.stargazing.net/david/moon/moonrise20050917.html)

Druzelle stood in the garden outside the Earl of Campbell’s manor house.  With a swish of her hand, she became the image of Sarah, the Earl’s housekeeper.  Quietly, she made her way into the dwelling.

As Druzelle passed through a hallway, she happened by a rather dusty cupboard.  “Tsk, Tsk what an untidy maidservant you are, Sarah, dear,” she remarked while running a genteel finger through the grime.

Dusting her hands together, Druzelle found herself heading down still another passageway.  Suddenly, she stopped dead in her tracks as a chill swept up her spine.  Just inside one of the rooms sat the traitorous witch, Yulricka.

Druzelle quickly stepped from view.  “What is she doing here with one who hangs witches?”  Druzelle stood perfectly still, not wanting to continue past the room.  Yulricka was a malcontent in the witch community and possessed a strong telepathic power, though that is about all the witchcraft she did posses; Druzelle feared the other might have the cognizance to see through her disguise.

With quick side steps, Druzelle turned to head down an adjacent passageway.  Then she spied something on the floor.  Reaching down, Druzelle drew up a miniature silver locket.  Crushing the fragile necklace against her chest, she whispered.  “Surely this is the same one that Luena always wears.”

Quickly, Druzelle ducked down the other passage that led to the larder.  There, she surmised would surely be servants from which she could hear the manor tattle and perhaps find out something concerning Luena.

Druzelle stood outside the manor house once again.  “Ignorant peasants!” she howled.  “All they can talk about is how high the bread has risen and if snow will come early to the fields.  Not a one of them has any good gossiping skills.  They are, undoubtedly, the most boring bunch of old crones I have ever seen.  Humph!”  In a flash, the rotund witch vacated the premises.

Druzelle laid the tiny necklace in Brunda’s outstretched hand.  Casting another temporal displacement spell, the two watched the vision of Yulricka jerking the locket from Luena’s neck and tossing it to the floor.  The scene faded as the little girl and her assailant moved away from the necklace.

Eagerly, Druzelle put in. “At least now we know who was responsible for Luena’s capture.”

“Yes we do,” Brunda continued to speak in low, sinister intonations. “When I get my hands on that…” Without finishing her words, Brunda strode across to her work table, where sat her sleeping crystal ball.  “I have been trying to find Luena within its depths all day.  It must be Yulricka’s doing that no image of the child can be found.”

Druzelle began to wring her hands ruefully.  “What shall we do now?  How do we avert Yulricka’s magic?”

“I’m not afraid of that traitorous bag o’bones!”  Brunda thundered.  “Once the moon’s golden fingers touch Luena, she will be able to tell us where she is.  We must not underestimate the child’s power, Druzelle!”  Then Brunda chuckled to herself.  “Yes, Yulricka will wish that she had never tangled with us.”

Tales of Nightshade: Daughter of the Silvery Moon (Part Two)

(Photo found at this site: http://tinyurl.com/a8r7a6n)

Luena held her silver heart-shaped locket in one slender hand. In her mind’s eye, she could hear the tap, tap tap of the big black bird‘s sharp beak against Brunda’s windowpane. Tap, tap, tap it came again and she saw a sleek, black cat jump up onto the window sill and bend its head to one side as it gazed toward the bird.

Rowena turned her narrow, feathered face so that one black eye glistened at the cat. “Caw, caw,” the sound leaped from the yellow beak. The tapping resumed.

Disgruntled, the black cat turned, giving a swish of his tall to the feathered fiend and jumped down onto the floor. The cat glided across the room toward a darkened corner where his mistress slept.

A cacophony of snoring issued from the withered lips of the old woman. It took several pats from Mandrake’s paw to awaken her. Brunda’s eye lids parted. She was not pleased.

“What?” she thundered. “This had better be good, drat you!” She pulled her aged body up from the bedding.

Poised beside the window, Brunda glared at the black bird. “Rowena!” she scowled. “You mangy crow! What does Druzelle want now?”

The bird cocked her head, ruffled her feathers and dropped a rolled parchment onto the windowsill.

Brunda drew back the latch. Lifted the glass pane. Her irritation was obvious as she read through the note. Nonetheless, she scowled and nodded her assent. Rowena flipped her tail feathers and flew back to her mistress.

Luena and Druzelle walked along the frosty, cobbled path; they could smell freshly buttered toast and potatoes frying. Brunda drew back the front door and motioned the pair to enter.

With a gently hand, Druzelle pulled Luena to the front porch. The lady’s stiff, white apron and the pungent smell of starch filled the little girl’s senses.

“This is Luena Pierce. I found her in the cellar of her home after those…” Druzelle leaned forward to whisper in Brunda’s ear. “Monsters came and took her poor mother away to the witch trials. They hanged her yesterday evening.” Druzelle tried desperately not to let the little girl hear the gruesome tale. But Luena did hear. Cold tears spilled down her face.

Brunda stood arms akimbo. “Well, what made them think Mrs. Pierce was at fault!” Brunda didn’t bother to lower her voice. Her tender-hearted sister glared at her.

Druzelle took Luena by the hand and lead her to a far corner of the room where Brunda’s work table stood. Then she whirled on Brunda.

“Can we please talk outside?” Druzelle called over her shoulder. She was already heading for the door.

Brunda rolled her eyes in disgust and followed. The front door clattered shut. Druzelle drew herself up. Her blue eyes were ice chips. 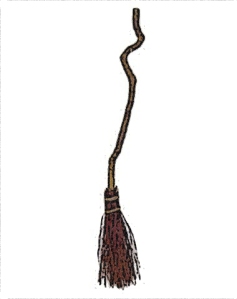 The next night, as a full moon filled the sky, Brunda gathered several hemp bags full of dried herbs and loaded them onto her broomstick. Deftly, she boarded the narrow perch. Mandrake hopped up beside her. In an instant, they were airborne.

Beyond the forest, a bonfire flashed. Around it a group of black clad folk moved with the frenzied gyrations of wind tossed leaves. Brunda guided her broom toward the shadows that clung to the forest’s edge. She dismounted and walked toward a cauldron where boiled a foul-smelling green mixture. She dropped most of her bundles to the ground and waited to catch the eye of a hag who stood close by. Gerda was busy clapping her hands and tapping her pointed shoes in rhythm to the music. Sparks flew here and there each time her withered hands made contact with one another.

“Yes… but I’ll not be staying,” Brunda replied. “Pressing matters draw me elsewhere.”

Gerda’s eyes shifted from side to side. “But Magwa…”

“What about Magwa?” Brunda thundered.

Gerda watched in terror as Brunda’s faded blue eyes became two red disks of flame. Gerda raised her hand to her mouth and bit until a small trickle of blood appeared.

“Well!” Brunda drew closer to Gerda, who seemed to shrink in size with each step backwards.

In a small voice, weak as a mouse, Gerda replied, “She … Magwa has been looking for you all … all night. She’s…” Gerda swallowed loudly, eyes darting in all directions. “Magwa is quite annoyed that you, you were not here. Brunda, no!”

Gerda’s eyes had become two empty discs as Brunda raised her hand within inches of the other’s face. Slowly, Brunda lowered her hand until one bony finger rested upon Gerda’s short, pug nose.

“But I am here,” Brunda’s voice was deliberately gushing. Then it rose several octaves. “No one dictates what I do; not Magwa, not anyone! Do you understand?”

“Good,” Brunda replied. “That is very good, Gerda. I know you do not relish spending your days as a spotted hog or worse.” Brunda chuckled softly, then pointed toward the bundles.

“These are the herbs everyone requested. Now I shall be going. Tell Magwa that I … stopped by.” Brunda gave a roar of laughter and turned toward her broom and Mandrake. A bolt of lightning flew from her fingertips and the broom raised itself off the ground. Mandrake jumped lickety split onto its handle and the broom drifted over to Brunda. She threw her leg over the handle, climbed aboard and was gone.